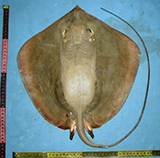 Elasmobranchii (sharks and rays) > Myliobatiformes (Stingrays) > Dasyatidae (Stingrays) > Urogymninae
Etymology: .randalli: Named for J.E. Randall, Bishop Museum; whose work on the taxonomy of Indo-Pacific fishes is legendary, and who was amongst the first authors to publish a photographic image of this species (as H. gerrardi) in his guide to the fishes of Oman (Randall, 1995).  More on authors: Last, Manjaji-Matsumoto & Moore.

Western Indian Ocean: off Kuwait, Bahrain, Qatar and Iran. known from the Persian Gulf from where it is possibly endemic (Ref. 90168).