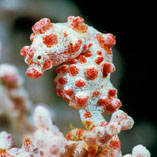 Dorsal spines (total): 0; Dorsal soft rays (total): 13-15. Description based on 4 specimens: Adult height, less than 2.0 cm. Rings, 11-12 + 31-34. Snout length is greater than 4.0 in head length. Dorsal fin rays, 13-15 covering 1+1 rings. Pectoral fin rays, 10. Coronet, a rounded knob. Spine, as irregular bulbous tubercles scattered over body and tail; a single prominent rounded eye spine; a single low rounded cheek spine. Other distinctive characters: head and body very fleshy, mostly without recognizable body rings; ventral portion of trunk segments incomplete; snout extremely short. Color pattern: two color morphs are known: (a) pale grey or purple with pink or red tubercles (found on gorgonian coral Muricella plectana) and (b) yellow with orange tubercles (found on gorgonian coral Muricella paraplectana).
Only known to occur on gorgonian corals of the genus Muricella, with up to 28 pairs on a single gorgonian. The tubercles and truncated snout of this species match the color and shape of the polyps of the host gorgonian, while its body matches the gorgonian stem. So extreme is this camouflage that the original specimens were only noticed after their host gorgonian had been collected and observed in an aquarium. Post-pelagic young settle on various hosts, but to breed, they appear to prefer the red polyp Muricella spp. That usually grow in depths over 20 m (Ref. 48635). Ovoviviparous (Ref. 205). The male carries the eggs in a brood pouch which is found under the tail (Ref. 205).