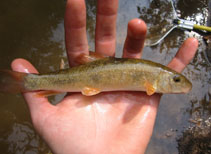 North America: throughout most of Canada to the Atlantic Coast, south through North Carolina to New Mexico in the USA, becoming less common in the southern High Plains.

Adults home to certain gravelly spawning streams. Two to four males crowd around a female and press against her with their fins. Eggs are scattered and adhere to the gravel or are carried downstream and adhere to the substrate when the water is calmer. The spawning act lasts for 3-4 seconds and may occur 6-40 times an hour (Ref. 1998). Spent adults return to the lake 10-14 days after spawning began. Most females return to the lake during the first half of the downstream migration followed by most males in the latter half. Downstream fry migration occurs between dusk and dawn (Ref. 10928).

Entered by Froese, Rainer
Modified by Torres, Armi G.
Fish Forum
Sign our Guest Book
Back to Search
Random Species
Back to Top