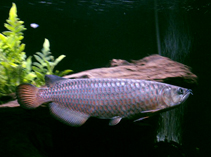 Oceania: Fitzroy River system of central-eastern Queensland, Australia. Introduced to a few other systems in southeastern Queensland. Protected in Indonesia, where it does not occur, probably as a misidentification of Scleropages jardinii (Ref. 12217).

Maturity: Lm ?  range ? - ? cm
Max length : 100.0 cm SL male/unsexed; (Ref. 44894); common length : 55.0 cm SL male/unsexed; (Ref. 44894)
Live in still waters and slow-flowing sections of streams. They are usually seen near the surface or near shore among aquatic vegetation (Ref. 39857, 44894). Territorial and aggressive towards other fishes, particularly conspecifics. Scratches and wounds resulting from fighting arre frequently exhibited by adults captured in the wild (Ref. 44894). Feed on aquatic and terrestrial insects, fishes, frogs and crayfish. Mouthbrooders (Ref. 39857, 44894). Breeding occurs prior to the wet season at temperatures between 20°C and 23°C. A renowned angling species (Ref. 44894).

"Spawning is by direct pairing. For several days prior to the estimated egg-laying time, the pairs were in continuous close company, swimming near the surface. Courting activities include close following, intermittent angled swimming (head down), vent nudging and lifting by the male. Individual males are capable of participating in at least two spawnings per season. A male will repair with a new available female within several weeks of an initial mating. Females carrying unhatched eggs or larvae in the mouth are distinguished by a conspicuous white chin during the incubation period. Incubating females spend more time at the surface, exhibit no aggression to other non-carrying individuals and show no interest in food. Occasionally two incubating females will briefly act aggressively towards each other. During the latter stages of incubation the females concerned continually circle and inspect shallow shore areas. Temporary release and recall of developing larvae occurs during daylight hours. The female comes into the littoral shallows, releases the full brood and continues swimming slowly parallel to the bank. Larvae maintain station around the head of the adult with individuals making brief excursions to the pond edge. The released juveniles are observed closely by the female. A sudden kinking movement of her body is followed by the rapid return of young to her mouth" (Ref. 39857).